TO BE A CONTAGIOUS EPIDEMIC OF AGAPE LOVE

Order of the Round Table – Anam Chara (Soul Sisters)

Order of the Round Table is a band of Soul Sisters who pledge to be there for each other. In these days of great confusion about women’s role in society, our identity remains secure as Daughters of the King…Women of the Word…Each for the Other Friends. We realize that every person has at least a fifteen-foot sphere of significance influence. As Soul Sisters, we commit to making ours a positive one of ministry and encouragement. For more information about the Order of the Round Table, what we do and how we do it.

Pastors and people in ministry… Do you need a place to regroup away from phones and appointments?

Enjoy a quiet walk on our Meditation Peace Walk. Stroll down the hill and through the woods to a little stream and waterfalls. Or just rest in the comfortable wooded setting of your personal cabin. Fully furnished, there are inspirational books and videos, along with everything else you need, at your fingertips.

Music to soothe... Materials to inspire.

Visit our products page for Books On CD
Visit Amazon.com for other books and CD’s
from The Foundation Association

For those who could use a lift…

For those experiencing faith issues, or to leave in random places like restaurants or shops. 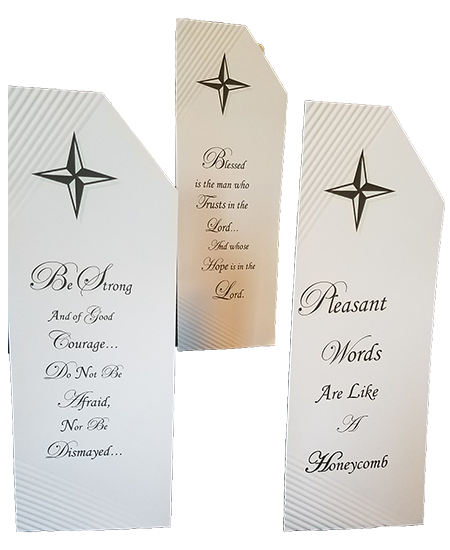 A Cathedral of Nature

A quiet, scripture inscribed, private place for personal meetings with God. Enjoy a serene path that winds through the woods to a rippling stream. Angel statues, scriptures, and resting places tucked along the way, give solace to the grieving, and comfort to the stressed. A small replica of the Hope Monument graces the gazebo. Sit and listen to the little waterfalls while you gaze at the replica of Jesus talking to a young girl with a baby in his arms. ...Possibly she's giving the child to Him or He could be giving the baby to her. Or possibly it just represents her giving her life to Him as a "babe in Christ".

Giving To Those In Need

Click Here for More Information. Join Us for Some Christmas Joy

Word For The Week

Word for the Week is a short weekly inspiration, produced by The Foundation Association. A scripture verse of encouragement is followed by a “Thought for the Week”, which brings practical application from God’s Word to our world. Contact us for inclusion in this weekly email.

Light on the Path ~ by F.Brooks Sanders, PhD.

I still remember this story from when I was a child.  It's about a young boy who was called on to help save the life of his little sister.  She was seriously injured in a real bad accident and was dying from the loss of blood.  All attempts to locate a donor with her rare blood type failed, so the parents decided to ask their son, who had the same rare blood type, if he would be willing to help.

The dad sat down with him and explained what had happened to his sister, how she was badly hurt, and unless she got the right type blood, she would almost certainly die.  The little boy was quiet for a minute as he thought about everything his dad had just explained to him and then he said, "O.K., Dad, I'll do it."

They took him into the emergency room where his sister was and put him on a gurney right beside her.  The doctors and nurses hurriedly made all the necessary connections, and in a very short while, they were able to take his blood and give it to his sister.  There was, of course, great tension in the room as they waited for some response from the little girl.  For a while nothing happened.  Then she began to respond.  As the gift from her brother flowed into her blood-starved little body, she moved one of her arms and briefly opened her eyes.

The dad looked down at his son and said, "Way to go, Son.  It looks like your sister is going to be all right."  The boy smiled a faint smile and then closed his eyes. When the father looked down again, he noticed a tear running down his son's cheek, so he said, "Son, are you O.K.?  Is something hurting you?"  The little boy opened his eyes and through the tears said, "No, I'm fine, Dad.  I was just wondering though... When do I die?"

Somehow in the rush and confusion, no one had made it clear to the little boy that they didn't need all of his blood.  But in an act of incredibly selfless love, he had made the decision to do whatever was required to save his sister's life.

That's what happened that day on the cross.  The Lamb of God, driven by love beyond our understanding, made the choice to do whatever was required to save your life and mine.  Except in Jesus' case, he knew all along exactly what it was going to cost.  He knew it would take all his blood.  He knew it was going to require everything he had to give.

Just let that sink in for a moment.  Pray that somehow you will, at least in a small measure, comprehend the extreme cost of your redemption and the enormity of the love that prompted God to send His Son for you.

A Prayer For Today:

Father, when Your Son was here on earth, He told us that no man has any greater love than one who lays down his life for his friend.  When I consider what You and He did for me, that seems like something greater than laying down your life for your friend.  We human beings were not Your friends.  We were Your enemies.  We were running from You as hard as we could.  Thank You, Lord, that You loved us.  I can't even begin to fathom the depth and breadth and height of such love.  Please accept my heartfelt thanks and make me understand, as much as humanly possible, Your unceasing love for me.   Amen.

Life is a "s y m p h o r y !" he sang a the top of his lungs. Of course, he meant "symphony". But it was so cute that we didn't look forward to the time it would change.

On Sunday mornings you heard him singing above the whole congregation. His voice didn't exactly blend. The congregation was entertained weekly with his exuberance.

Our little singing brother, Randy, was four. I was twelve. My older brother, Brooks, was fifteen.

Brooks and I were veterans at our "P.K." (Preacher's Kids) position. Randy was so young and innocent that he approached his calling with unabated enthusiasm. It was contagious.

He memorized songs almost instantly, and if he came to a spot where he didn't know the words, he just sang the tune with la, la, la!  It was a performance of total abandon at full volume. There was no self-consciousness. He didn't seem to be aware that his volume or style differed from anyone else's. He was singing the way he did at home...with gusto!

The truth? Randy was simply doing what his father asked. When Dad said, "Let's all join together and sing hymn #402, 'This is My Story, This is My Song' ...And sing it like you mean it," Randy did!

Then the time came for one of Dad's memorable sermon illustrations. He looked down into the congregation and said, "Bub, (his nickname for Randy) come up here and help Dad for a minute, okay?"

The excitement showed on Randy's face. He climbed down from the pew and headed for the platform. How Randy loved his Dad! Dad was his hero, his role model, his compadre. And Randy was Dad's shadow. He studied his father's every move.

We noticed that Dad had placed a folding chair on the platform. As Randy reached the stage, he said, "Okay, Bub. Here's what I want you to do."

Eagerly, Randy listened for his instructions.

"When I count to three, I want you to jump over this chair, okay?"

The look on Randy's face was one of disbelief. In an instant, excitement, shock, fear, desire... everything was there at once. His little mind was racing! How could the father he loved, the father he trusted so implicitly, ask him to do the impossible? ...Plus asking him in front of almost every person in the world he knew, not to mention, some he didn't! Even a four year old understands failure, embarrassment and shame.

Innocently, and almost on the verge of tears, Randy looked up at his father and said, "Daddy, you know I can't do that."

The back of the chair was several inches taller than he was, besides the breadth that needed to be jumped. The assessment of the four year old was, in fact, accurate. He was dealing with reality.

Dad responded unconcerned, "Sure you can, Bub. Now, I'm going to count to three...And when I get to three, you jump, okay?"

A strange combination of confidence and uncertainty registered in the "Okay, Daddy."

"One, two, three," came the count. When Dad reached "three," Randy jumped. At the same instant, Dad put his strong hands under Randy's arms and lifted him over the chair.

A look of relief and excitement broke across Randy's face. And Dad said, "See I told you, you could do it."   The smile grew even bigger, as Randy looked lovingly into his father's eyes and said,

A Prayer For Today: